This show is located on a tree-lined street in front of the neighborhood civic center. Tents are aligned against the curb on both sides of the streets. The length extends approximately 200 yards. The Civic Center held an art contest which all artist were able to submit one piece and kids craft section in the front lawn. There was a food truck section adjacent to the art show. The show was held in an older section of town. Large well built homes from the early 1900s fill the area with a mix of millennials who appreciates quality and established residents in their 60s and 70s. Load-In started at 7 a.m. and Out at 5 was fine. Everyone seemed to come at different enough times that there wasn’t too much waiting or any bottle-necks. This show was pretty much “no-frills” except for coffee and donuts. No water, no booth sitters. I heard they had a hard time finding volunteers which is understandable in this economic climate. I didn’t feel the people who were running the show were especially friendly but I wasn’t bothered by that.

Now there was a rather critical AFI blog post about this show from 10 years ago. This combined with YouTube videos I found led me to have low expectations. I’m an acrylic landscape painter with 3 different sized canvases ranging from $100-900. No prints. I wanted to get my feet wet and work out the kinks I may have for my 2 larger June shows. I am also trying to build a contact list for the Cincinnati area for potential future sales. I’m in this for the long haul so I have a particular strategy in mind.

The show started at 11 and the foot traffic was relatively consistent. The forecast was sunny with high of 85. It got rather warm but a beautiful day nonetheless. I would say there was a few thousands people there from mostly nearby, within a 10 mile radius. I heard an ad for the show on the radio. I thought it was good mix of people. I felt people were there for the art even if they weren’t buying it. I had many great conversations, received good feedback and ended up selling 6 paintings and even won a small prize at the art contest. While I did see people walk off with art I also heard the show was much lighter than previous years and some artists left disappointed. I only need one or two dozen people to be really interested in my work and I achieved that.

All in all, the show really surpassed my expectations. I have a couple of people anxious to buy some of my smaller pieces when it becomes available and a couple more interested in my larger ones. This is a neighborhood show with a few people who are willing to spend. Plus the show costs less than $100 (including jury fee) and I made half of that back with the prize I won. One of the criticisms of this show was that it wasn’t publicized. When they charge so little for artists to participate and they include cash prizes for the art contest, there’s not going to be much left for paid advertising. If you are within a 2 hour drive of this show, I would recommend it. 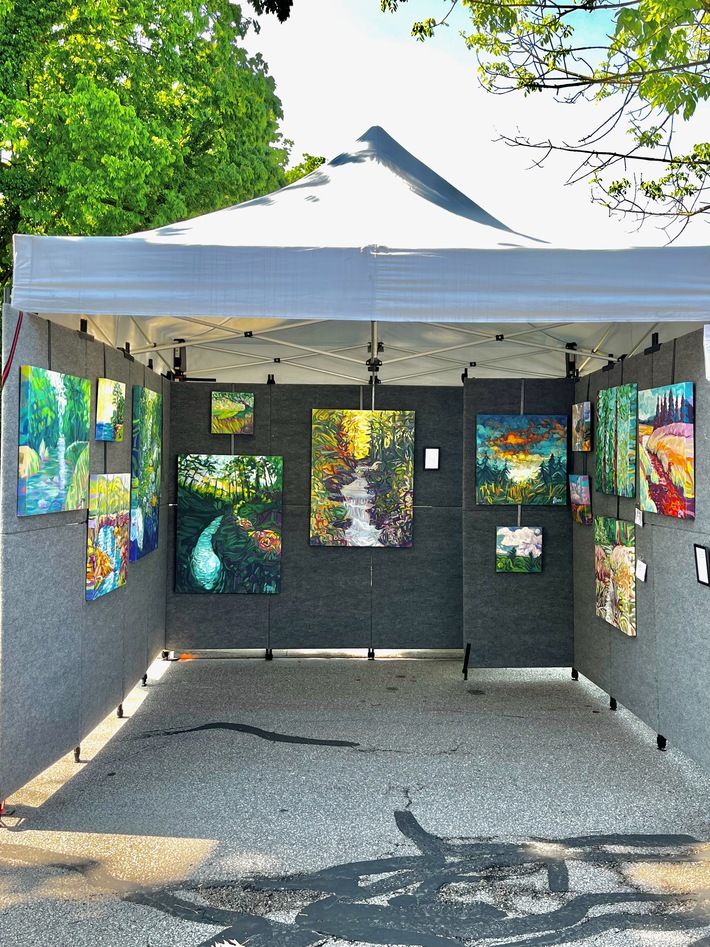