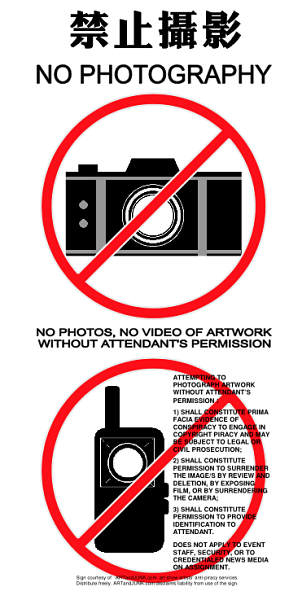 This article was published in the current issue of Sunshine Artist magazine and is reprinted here with the permission of the publisher, Nate Shelton, and the author Gregory Strachov. Photos by Gregory Strachov.

In recent years, many professionals on the art & craft show circuit have noticed a conspicuous activity that poses a threat to the copyright of their intellectual property. Specifically, the issue involves professional photographers who are appearing at some of the nation’s most-noted art festivals — and we’re not speaking of shutterbugs who juried in.

Rather, these photographers carry expensive, sophisticated cameras — often two — as they stand in front of exhibitors’ booths. They boast  lenses that require no tripod to stabilize and high-resolution digital equipment that can pick up the detail of an artist’s signature from 100 feet away. And they usually pretend to focus on the ground or the sky while keeping a firm eye on the display. When the artist is not looking, though, or when the crowd in the booth thins down, these still-life paparazzi quickly photograph as much work as possible.

When confronted, they are often aggressive and use some variation of the excuse that, “This is a public place and a free country.” Unfortunately for them and fortunately for art & craft professionals, copyright laws only make an exception for works in the public domain, which comes into play once the creator has been dead for 70 years. It’s true that artists’ booths are in a public place, but the property within these booths is still private intellectual property that cannot be photographed without the express permission of the author.

Furthermore, no gallery or museum permits photographs to be taken of the work on display in those venues, although they too are public places. This is copyright law 101 — and an issue that every artist and craftsperson should be aware of before they head to their next show. 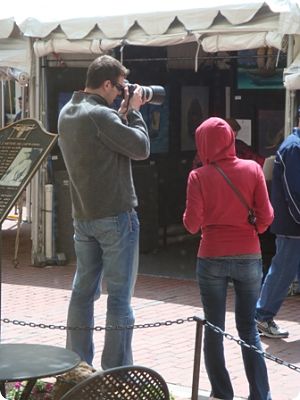 Artists in general know that copying someone’s work is unethical, and the public generally knows this as well. Moreover, courts have found photographs of paintings to be copyright-infringing derivatives of the original. The only reason an artist would permit a stranger to photograph his or her work is for known reasons that the artist alone would determine as allowable. If the artist verbally expresses or posts a sign stating that his or her work must not be photographed, there should be no debate about it.

Nonetheless, stealth photographers who appear at the shows are insistent, pervasive and relentless. When confronted, they are often argumentative and offensive, because they know that an artist’s hands are tied as he or she attempts to remain professional and in good standing with the festival committee. No artist wants to be blacklisted by an event, and some shows would prefer to get rid of one troublemaker than consider alternatives. The photographers understand the show environment very well and use this to their advantage.

There are also “artists” who market their work in completely different venues than ours. For them, it is cost effective to go to a prominent, national show, walk into a booth filled with work that is selected by an educated jury and photograph it. They can easily gather multiple market-proven and edited ideas that they then bring to their studio, copy and send to markets that we never see. At the end of the day, they know that our venue does not provide the kind of income needed to afford an $85,000 legal fee to attempt to bring justice to the case.

Photographs are taken in a variety of ways at shows, too.   One common method involves asking if one can photograph a child in front of a booth while using a wide-angle le 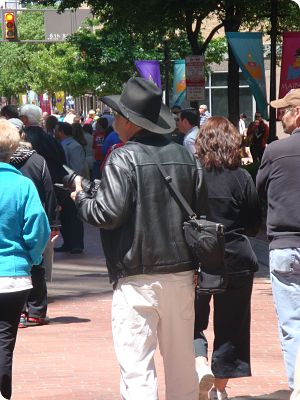 ns setting. Another method is to set a digital camera to record video as the photographer does a panoramic sweep through the booth, and this can also be done with a cell phone. Most photographers use sophisticated equipment, though — some even use wand scanners that can immediately send images to an external party.

Take a recent encounter I had at a major Northern show. An Asian show-goer was photographing booth after booth. Her focus was on ceramics as well as on displays of blown glass. I went to follow her with my camcorder in an effort to document her activity. When I got to within 50 feet of her, though, she turned as if she’d been alerted to my presence in the crowd. I noted she was wearing earphones similar to a security agent.

As soon as she spotted me, she disappeared between two booths and was gone. When I turned, I saw two Asian men standing right behind me. They had the same kind of earphone and mouthpiece as the female, with wires leading to a small box attached to their belts. These certainly were no ordinary tourists. And it is worth nothing that China has shown a repeated interest in the reproduction or cloning industry, and that interest has been cited by the media as being a major concern of both the tech and fashion industries. It is should also be a concern to artists.

At another national, well-known show, in Denver, a man appeared and photographed all of the booths in the painting category. I approached him to ask what kind of cameras he was using. He responded as though he had a severe mental impairment and spoke as if he could only utter some sounds.

The following year, the same man appeared near my booth. He had the same two cameras and field jacket that he wore the year before. I said hello, and he replied in clear, spoken English. I went back into my display to ask him why he was photographing. But before I could say a word, I saw that he had a wand that he used to scan my painting with a methodical sweep. I asked him to stop. He smiled, said that it was “already sent” and quickly left.

Now, I always have “Do Not Photograph” signs in my booth. So I looked for someone who worked with security, but they were nowhere to be found. I felt helpless because my better judgment told me to apply serious restraint and avoid an incident that might damage my reputation or disrupt the show. But the fact is — and as many other artists and craftspeople can attest — these were not isolated incidents.

Solving the problem
I have spoken to various show directors about this problem, and the reactions fill the spectrum. On the proactive side, the Winter Park Sidewalk Art Festival made an 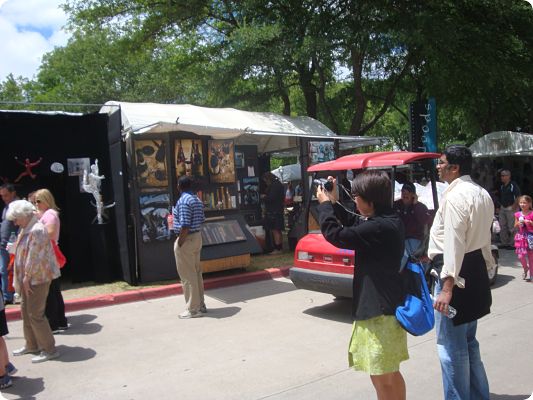 informative sign two years ago to warn the public that the art on display should not be photographed. The show committee announced that these signs could be used by artists on a voluntary basis. Two members of the committee also made every effort to inform the exhibitors of the availability of this sign.

Regardless, too many artists knew nothing about it, and the lack of uniformity diluted the intent as well as enforcement. When photographers were spotted at the show — and there was one who stayed most of the afternoon, posing as an “official photographer” — nothing that I know of was done to stop him.

Even more frustrating, several show directors I’ve spoken with did not seem interested in the matter. Many of them simply wanted to ignore the issue primarily because they knew very little of copyright law and did not want to make an error by enforcing laws they knew nothing about. Some said that the matter is up to each individual artist; however, this does not offer enforcement, since the artist alone cannot be effective in getting the message across without creating a disturbance. Other directors expressed interest but felt that their boards would not agree with taking any action.

Therefore, it appears that many show directors need to be informed about copyright laws regarding the copying and photographing of artwork. They should also have a plan implemented to help safeguard their exhibitors’ intellectual property in the same way that they have plans for medical emergencies and other human needs. Finally, committees need to know that they have a legal right and perhaps an obligation to have some plan in effect. 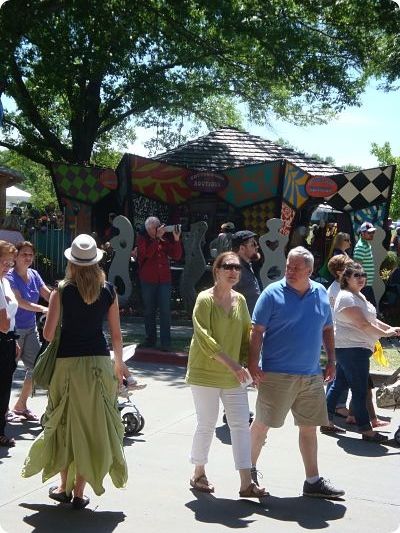 In short, they need to understand that having intellectual property in a public space does not make it part of the public domain, and that acting as if it does is unacceptable behavior with potential legal consequences.

The solution might be as simple as a commitment on the part of shows to inform their public, not only by posting rules but providing an education regarding this matter. This could be done very gently in the show literature as an ethical and moral understanding. Rules posted by the show would also arm exhibitors with an official stated fact if a confrontation occurs. And since promoters gain revenue from exhibitors, it would benefit show-runners’ relationship with the arts & crafts community if they elected to promote and enforce rules that inform the public about copyright law and the artist’s right to protect their private intellectual property.

Furthermore, by having these rules well publicized, the public might act as police simply by the default of peer pressure. The public does not get hurt, the artists will benefit and the show will reap goodwill benefits.

In the worst-case scenario, there should be some security personnel available to enforce the rules by escorting violators from an event or permit the artist to file a legal complaint. Most artists that I have spoken to are very aware of this situation and are angry, but they feel helpless because frequently no action is taken on the part of show committees to effectively address this problem. And make no mistake: Photographing art without permission is theft!

Everyone knows how to act at weddings and how to dress for a funeral. Yet the general public knows little about our industry. The few films that depict Van Gogh or Pollock ar e hardly the representation needed to inform the public about fine arts and crafts and the dedicated individuals who create them.

However, the public can be educated about behavior that would be appropriate and respectful at a show. They can and should be better exposed to the seriousness and commitment that creators have for their work, in that they devote their lives and travel thousands of miles for the opportunity to make a living with their artistry. What these artists certainly did not agree to, though, is to provide an opportunity for photographers who are assigned to steal their work for the various markets that would benefit at the artist’s expense.

We, as working artists and craftspeople, should all be hopeful that our community and industry will agree to address this problem, and leave this sort of intellectual property theft on the cutting room floor — where it belongs.

Click on this link to print out the "NO Photography" sign pictured at the top of this article: DoNotPhotograph.pdf

Gregory Strachov has been a full-time working painter for over 30 years, during which time he has received numerous industry honors and awards. He can be reached at strachovstudio@gmail.com.

of 12 Next
This reply was deleted.