This was the second blog I had ever written in my life, also happened to be the first of my "Tequila Reports."

It was Superbowl Weekend in Tampa.  Everybody was in town trying to make a buck off the Superbowl.  I went to my favorite Cuban food hangout in Ybor City.  This is where I encountered the "Naked Cowboy."

I didn't have a camera at the time, so the below pic came later.

Thought some of you newcomers who were not around then (That would be more than 8000 of you) might enjoy this little missive.

It was my beginning of wry observations and how some of them relate to us on the circuit.

Its Superbowl week in Ybor City.

I was having lunch at Carmines Restaurant on Seventh Avenue.  I live in Ybor City, one block off the main drag.

I was eating my black beans and rice--and a crab roll, heavily laced with Louisiana Tabasco Sauce--OK, also a little Patron Tequila (The beginning of the Tequila Report)--and who strums by in his BVDs--the Naked Cowboy.

In case you have not heard,this dude has been strolling around the USA in his BVDs.  Singing on his guitar.  Stopping to let people take his picture.

He is cuter--than he is a singer.

So there he is in Ybor City riding the Superbowl Wave.

It will be interesting tomorrow to see if he is still in his BVDs, singing, since it is only going to be a high of 55 degrees, and windy.

It seems everybody who has a scheme to make money has descended on Tampa.  Its crazy.  I wonder why Howard does not have a show here this week.  (Boy, did I catch hell from Connie over that comment.I was just being truthful and observant--and I would say now, "Good for Howard Alan if he could have pulled off a show there.")

Oh well, I get to miss the Superbowl and travel to New Smryna Beach tomorrow and set up in chilly, windy temps.  And then, hope people come out to buy. (I made $600 that weekend).  Aren't I lucky.

OK, here is a little addition.

By now, I had gone home (This is after lunch at Carmines, after seeing the Cowboy) and seen the Little Woman, and she filled me full of insight.

She says, "You figure you are a photographer?  WHY DON'T YOU HAVE A PICTURE OF THE NAKED COWBOY?"

Well, when I go to Carmines I bring a book, and not a camera.

But, to describe him  accurately, he was six-foot, well-muscled, well tanned, hair blonde down to his waist. And, he had a cowboy hat on with his cowboy boots and, CLEAN BVDs.--that were skin tight.

My wife,Ellen Marshall-- a painter on the circuit that some of you know, had a curious question.

She wanted to know if he was wearing a jockstrap.

Well, STUPID ME--I was eating crab and swilling tequila, and I was not close enough to evaluate such a close measure of manliness.

Oh well, next time I will bring my camera.  Aloha, Nels.

And from that episode was the humble beginnings of the Tequila Report.

Hope you enjoyed it.  Nels. 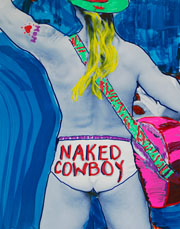