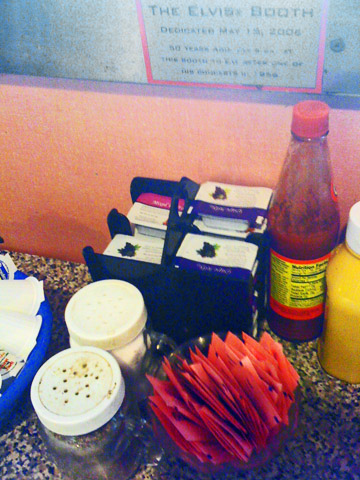 Well it has been a while, so I thought I would leave this little "bon mot" under your electronic Christmas Trees.

Recently, in Tampa, I have discovered this great little diner on Florida Avenue called Nickos.  It is an old railroad car diner run by a Greek family who does everything right.  Generous portions, cheap prices and great service.  It is frequented by undercover cops, working trademan and even an occasional artist or two.  Heck, Elvis Presley ate in this diner in 1956.

How do I know?  Because it is boldly printed on all the menus.  So today, I went in for breakfeast and sat down at the second booth in from the door.  I happened to look over where all the condiments were stored, and lo and behold, there was this little metal plaque attached to the window.  It basically  said that Elvis had sat in this very seat after one of his shows in Tampa in 1956.  It made me think a lot.  About Elvis and the life we live at being artists who sell on the street.

In 1956, Elvis was just getting started, he was a new whirlwind phenom, nobody had ever seen the likes of him before.  Justin Bieber don't have anything on Elvis, hell, he couldn't hold his pancake fork, but anyway, back to Elvis--and us.

I wondered if Elvis was experiencing a real high after his performance.  I wondered if it was anything akin to how I felt back in 1999 when I almost sold everything I had at the Kansas City Plaza Art Fair (don't worry, this blog is not going to be all about me--this just served as an apt metaphor).  I wondered if he ever had to deal with daily rejection like we experience when we get our little electronic blips on the internet which tell us "thumbs up! or thumbs down!."  Back in the days when we all got those SASE letters in the mail, remember that.  Yeah, you could feel for slides in them, right away, you knew you were out.  Except a few shows could still fake you out.  The slides would be in there along with a much coveted letter that began with "Congragulations."

One of the coolest ways you knew you were in, was when you got an SASE from Harvey and Audrey.  They were the original founders and promoters for the Cain Park art fair, in Cleveland, back in the 80's and into the early 90's until their passing on.  Anyways, what made their response so cool was how they sent the SASE.  If you were accepted, Harvey would write above your name on the SASE,"Good News for" Nels Johnson, or Munks or whoever it was addressed to.  We don't get those little highs anymore, I kind of miss them.

As I sat eating my plate full of homefries with perfectly cooked onions along with the cuban toast which only costs ten-cents extra, I thought some more about Elvis.  I said to myself,"Heck, he was more famous than I will ever be, but I outlasted him.  I am still trucking along making my art, doing my 35 shows a year, still playing golf and still eating and drinking good."  There is lot to be said for that.  I figure, with luck, I got maybe 15 more years in the biz.  That equates to about 325 more possible shows, give or take a few.  I wonder how many of them could be a Cherry Creek, A Grove, A Kansas City--heck, maybe even a St. Louis or two.  You gotta have hopes and dreams, and baby, always have lots of them.  And I hope you all do to.

So this is my kuleana (that is a  Hawaiian word that means a gift of the spirit) to all of you out there.  HOPES AND DREAMS.  Never give up.  We are all special.  Nobody can fire us, not a lot of people can feel that way.  You are your own boss, nobody gets to tell you what to do.  You are the supreme creators.  You make the art, and in turn it helps make you.  It define who you are, it leads you on a path of good life.I don't think Elvis ever got to know how lucky he was.  We do, and we are on the right side of the growing grass.  Cherish these moments and thoughts.  This is the moments of our lives, embrace them with fury that knows no bounds.

Merry Christmas and a happy 2011--things will get better.

PS Haven't written a lot lately, don't know how much I will write in 2011, depends on how much "meat" is thrown out there, or the lack of.  It is good to see new names out there contributing to our lives.  I still think a little bit more info could be included in those reports, but at least people are contributing.