In my humble opinion, still the best one in the Southeast, better than Naples,Winter Park or the Grove. A five figure show for most artists.

I have only gotten in five times over a thirty year period.

Each time it was a killer, including this one.

I am a good photographer with a fair track record of getting into some of the biggies each year.  I just do not get into five or six of them like the Flynn's and Bjurstroms of the circuit.  They are a rare breed apart from me, and they deserve all the success that comes their way.

So when I got my acceptance from A-Sphere last October I was truly elated.

That coupled with Winter Park and Vero gave me a shot at accruing some moola in my meager bank account.

Many selected artists are from the nearby states that surround South Carolina.

They keep a small waitlist, but if you are not number one on it, chances are slim to be called.

That was different this year.  I will talk about it later.

Here are the nuts and bolts that shape this show.

Read closely, take notes.  I tell you useful info that almost nobody else dishes out.

The show is held downtown in Greenville on their Main Street that crosses a beautiful creek.

It is three days with an optional Thursday nite setup or early Friday morn.  I chose the Thursday setup.

All booths are 12 foot square with room to hang on at least one side with a three foot wide aisle between booths.  Double booths are available and go quickly.

Ample rear storage, you can have awnings front and back.

Booths are on pavement, you need ample weights.  This is a town with tall buildings and the many winds come rolling off them into booths.  Lots of rocking and rolling.

Most spaces, especially those at the beginning, are on a slope.  Shims helpful.

They have great food for artists.  Plenty of volunteers to spell you.

Now, I will talk about Greenville.

This is a beautiful and prosperous town.  Lots of young people, all well dressed. Men in suits and ties, women wearing great new outfits.  Lots of baby carriages everywhere.  The Main Street has a canopy of trees that stretches thru the whole downtown.  Lots of Tony eateries and retail.  Condos everywhere.

Greenville was not like that until about twenty years ago.

In the late 1980s and early 90s I would always begin my summer trip away from Florida by visiting a great artist friend who lived in Greenville.

His name was Loren Marshall and he was one the best flat glass artists I ever met.

Loren lived at the upper north end of Main Street where it intersected with Academy Street.

He lived in a vintage two story house that screamed the word "Hippy!" all over it.

I would arrive with my cargo van towing a nineteen foot travel trailer.  This was my home for the next five months as I did my Midwest circuit.  I was younger then, it was all a great adventure and I got to be stoned,smoking great pot everywhere.  But it always started in Greenville.

I would park my whole rig next door to his house in the Huddle House parking lot(a southern version of a Waffle House).

I would stay about three days and get some canoeing in on local whitewater rivers.

Back then downtown was deserted,  Bunches of closed up warehouses everywhere. Restaurants and bars nowhere. We had one so -so Mexican restaurant to eat and imbibe at. Greenville was so nowheresville.

Eventually, a small artsy-crafty show evolved, this would be the genesis that would become Artisphere.

Also, at that time the town got a forward thinking mayor.  He saw the potential that lie at his feet. "We got this great flowing creek right downtown. Let us build a great sculptural bridge over it.  Let us have all kinds of special events. Let us fill those empty buildings with new eateries, bars, condos.  Young people will flock to it."

And it happened. They built, they consumed, and they built more new places.  People thronged downtown. The mayor persuaded BMW to locate headquarters near downtown.  This brought in big European money and European tastes for the better things,

Eureka! A whole new metropolis rose from the ashes of bygone warehouses.

Heck, now you could get 25 different tequilas at the Mexican restaurant.  Drinks now came in freepour tumblers rather than one ounce nip bottles.

I saw this slowly happen over the span of the next 32 years, it was a sight to behold.

The town tapped a great inner resource, a man I was introduced to this year at the show.  The mayor brought him around to every artist booth and introduced him.

He saw the potential of the little art show and decided to make it very precious to attract the best of artists from the surrounding areas.  He did it well. This was now known as a hard to get in show where artists could make serious moola.

And that was how Artisphere was born.

OK Nels! Nice history lesson. Pour yourself a shot and tell us about this year's show.

I still was suffering from a punky back which was still not right since Mainsail in mid April.

I was cranking out new inventory all along, but the back kept hurting.

I was doing my stretches, icing it, taking Tylenol and trying to avoid the dreaded bolt of lightning which can hurt so bad that you cannot do your biz in the bathroom.

We planned on going in Wednesday, day before setup.  I was taking Ellen along.

From NSB, where I live, it is an eight hour drive to Greenville.

Straight up 95 go northwest on I-26 from Charlestown. Head for the foothills.

South Carolina cops are sneaky.  They now use almost invisible smoky grey cars with radar.  They are lurking everywhere.  I have a sixth sense about them.  I never go more than 5mph over the limit.   Plenty others for them to grab.

I got a great Red Roof just outside downtown, six nites for under $300, including taxes.

Had not been there in five years and things had changed more.  Took me a while to figure out how to get there,signage sucks, especially at nite.

Finally found parking for a great steakhouse that sat high above the creek downtown.

Used to be called High Cotten, now Hall's Steakhouse, very expensive. I just wanted to eat. We shared a filet, two baked potatoes and a Ceaser salad. I ordered a Knob Creek Manhatten on the rocks.  Should have enquirer about the price.  It was $22, Gulp!

Food was good, but I was already out a couple of Benjamin's.  Sales better soar.

I slept very well and awoke refreshed, a little broke, and prepared for setup at 6pm.

Then, a major complication happened. Later in the morn I went to the rear of the van.  My left door was stuck, would not budge open.I was screwed for setup if this door did not open. I was packed to the gills.

Then my beautiful wife made a great suggestion. Ask for help from the Red Roof staff.

I flagged down a gent who was painting the rooms. Told him the problem.

He grunted and pulled violently on a release cable on the door.  It opened.

Trouble was, when I closed the door the same problem arose.

He showed me how to gently close the left door til it caught.  Then  I could gently close it and lock it.
On to the show.

I left Ellen behind.  Figured I would finish setup, tarp up the booth, call it a day.

But at noon, opening show hour, everybody was open and selling.

Lots of suited gents with frames in their hand, coifed ladies laden with goodies.

The lunch crowd was buying, and the weather was being nice.

Around 4 pm it got windier and cloudier.  Then we got a storm warning.

At 4pm the show told us to close up booths, possible tornado heading our way.

Trouble was the buying stopped.

The buying never returned, we were cooked for the day.

But no tornado, booths all intact.

This was not a high end buying crowd.  Not as nicely dressed.

I never sold a piece over$200 the whole day.

I was not alone.  Not a lot of happy smiles on my neighbor' faces.

This was mimicking what happened on Saturday at Winter Park weeks earlier.

I talked my butt off, doing my best story-telling.  Results were meager.

Sunday had to be big, because this is not a Monday show.

We ate some great local barbecue that night at a place called Rocket Chicken.  It was delicious! I came back to the hotel, had a little Elijah Craig nite cap, and slept dreams of hope and grandeur.

We awoke Sunday and Ellen had a severe sore throat.  I went to the show alone, but spirited.

I would not fail to make my goal.

It was off to the races.  Nonstop sales rest of the day.

Also, all my neighbors had giant smiles.  We were making serious moola.

Made my goal and was out of there in an hour.

Woke up happy Monday morn and drove like a bat out of hell to NSB.

Then we found out we both tested positive for Covid.

That is a story for another time.

Hope you enjoyed the ride. 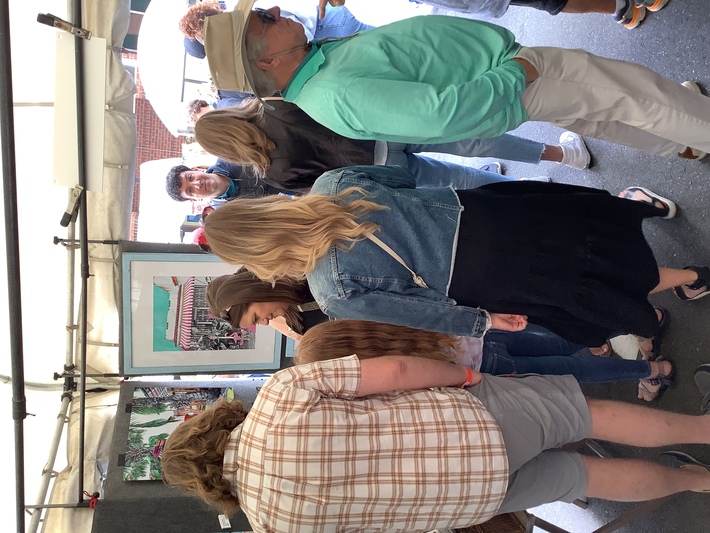