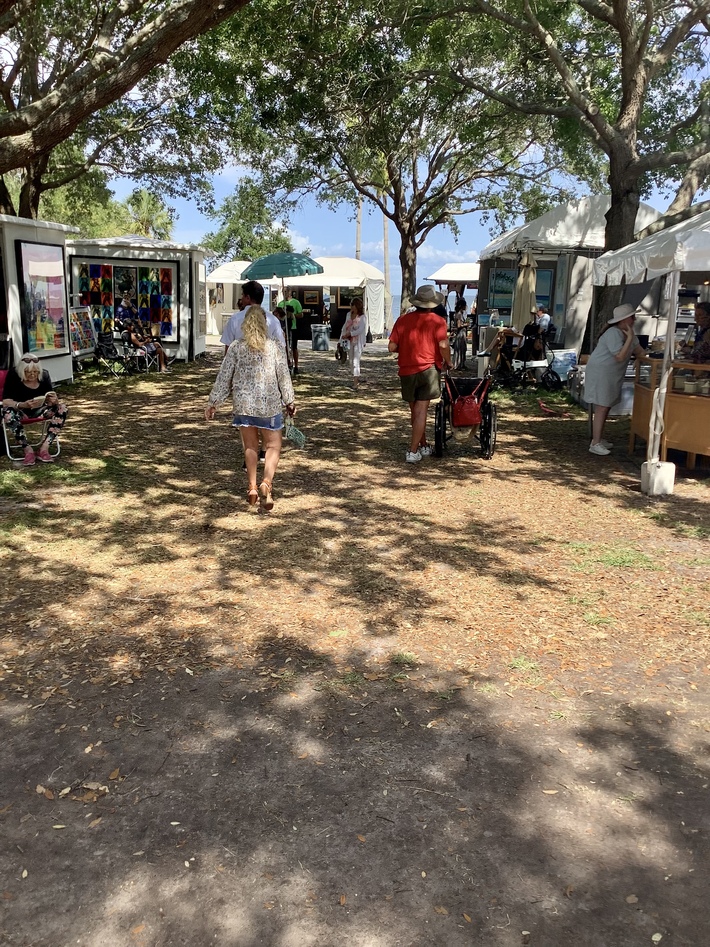 I just did the art fest in my birthplace and it is still an uncommon experience--for the better.

Mainsail is St. Petersburg's premier artfest.  This is now a town where downtown condos start in the low two millions.

I was born in the forties there.  It was a whole different town.

In the day, forties, fifties, sixties, even seventies, almost eighties, it was an inexpensive town to retire to. A town blessed to be by two beautiful bodies of water. Tampa Bay and the Gulf of Mexico.

Retirees flocked here.  It was affordable and the weather was perfect.

As Carson so sardonically observed, people sat on Green Benches-up and down downtown.

I was going to my Little League practice, across town

We passed by Webbs City on our bikes, this was the fifties.

I looked at all the retirees sitting on the Green Benches.

I looked at my buddy Dave Pontious, who threw the most wicked curveball, ever, and said, "Dave, you notice there no big dogs standing there.  They are all wee little people."

An important lesson about life I learned at age 10.

And so, in the mid fifties, age 10, I became an entrepreneur.

At Christmas, I would gather holly berries, pine needles and cones and make them into wreathes.  I would board the bus from the south side, and for a nickel, ride downtown with my wreathes.

I would sell everything I had to all the retirees on the Green Benches.

Fuck, Johnny Carson, they were my nirvana.  I would come home with more than twenty bucks, in change. That bought a lot of baseball cards and bubblegum.

So now I live in Mellow Yellow New Smyrna Beach and I was returning home to Mainsail.

For crying out loud, Nels, were you ever tell us about the show.

Thought you would never ask.

Plus, I will tell you more useful information than you will ever find on any other social media.

HOW I LEARNED TO LIVE WITH WEAKEST CROWDS EVER AT MAINSAIL AND STILL COME HOME A WINNER!

People were rolled over.

I figured with no show for two years, and people buying two million condos, they would be chomping at the bit.

I was woefully wrong.

First, some useful info about the show.

Most people never talk about this.

It is held at a treed, waterfront park with lots of bare dirt and some grassy areas.

Monthly, there are usually two to three events going on here.

This year they expanded it by adding 50 extra booths--totaling 270.

They give 12 foot square booth areas with booths in rows. Booths are back to back.  Rear storage can be tricky.

Setup is Friday afternoon.  The committee does not give out booth space numbers in advance.  Only Godknows why.  When you apply on Zapp you can request a specific booth, that is the only time.

They have reserved parking for artists.  The show is two days.

Here is some demographic info.

Lots of great restaurants everywhere. SP is blessed to have two water locations.  Tampa Bay with Tampa 20 miles across.  Then the Gulf beaches. Both locations hotly sought after.

Usually this show attracts multitudes of buyers looking to fill their condo walls and decorate with fine sculpture. In the past 30 years that I have exhibited here I have always done nearly $4K on Saturday.

Being a hometown product probably helps.  I have patrons who tell me about buying my images in the 1980s.

That said, this show was disappointing for the majority of exhibitors this year.

One, it was held on Easter weekend.  Never good.  Fewer buyers on Sunday.

Two it was warm and humid.
Three,and most important, the crowds were way off both days.

Of course, there were a small percentage of exhibitors who had a five figure show.

But most were lucky to get to $4K.

You would think that having no show for two years,that they would be chomping at the bit. Not!

I saw very few Good Shoes people there.  I had almost zero conversations about a patron looking for a big piece for the living room or bedroom.

I sell mostly color photos printed on paper under glass, matted ones in print bins, and large metal images on aluminum.

I sold about nine, then other sales were for small mats.  No interest in my larger images.

The crowds were very thin both days.  Usually by noon you cannot see across the aisle because of the crowds.  This time I could have thrown cinder blocks across and hit nobody.

Most people were just walking their dogs, no art in their hands.  It made for a very slow, boring show.  No great conversations.

Several artists I know said their sales have been going steadily down the last five years.

Unfortunately, I think people just think of us as just another event like a blues fest or seafood fest. Art is not for most.  Too bad.

My main gripe with the committee is their lack of caring where the event is held.

Too many of us were on black dirt, not a blade of grass near.  This is very disrespectful to the artists. I know of no other show of this stature that allows this to happen

I do not think things will change.

So, if you come, now you know what awaits you.

Nobody else gives you a blog with this kind of info--Nobody!