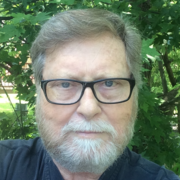 Years in the Art Fair Business

What are the best things about art fairs

meeting the customers and knowing where the work is going

Best show ever and why

4th Street in Bloomington, IN, An art concious crowd

Worst show ever and why

Metro Arts Two Rivers Expo in DesMoines , Iowa, in 2008. Drove about 800 miles to get there, horrible load in (really, really horrible), I was back in the rear of the place with a big sign that said "Children's Section" so what few people did come to the show didn't go back there. I sold the lowest amount I had in 20+ years, almost skunked, and lost about $1000 doing the show. The a little over a week after I get back I have a major heart attack probably brought on by the strenuous load in process. Small wonder I have litle warmth for that show. Then I get a letter the following year reminding me the deadline was approaching, so I sent an email declining. I get another one back asking if I would reconsider and what was wrong. So I told them. Never heard back from them ;-)

Number two on the list; This year's Hopkins Art Festival in Minnesota. Sold even less then Des Moines, but only lost $800 this time, so I guess that means the economy is getting better.

Who referred you to ArtFairInsiders.com? Please be specific.

What is one fun fact about yourself?

The adult interest school where I was teaching in the early 80's had long ran my beginning and portrait classes. Students kept on asking for a figure photography class. I assumed since the classes were generally held in rented spaces in churches for the most part that was not going to fly. I mentioned it to the school registrar, and he said try it anyhow. I wrote up a syllabus for the church board of trustees, outlined the sequence of the 6-week course (six meetings), stressing the fine art aspect of it using the appropriate language, and it was approved by a main stream denomination church. So for several years I taught a nude photography class in a church.

"Just to give you a pricing reference, here is my matted print price list. I print on Inkpress heavy weight glossy for the visual punch. I used matte surface for years but public preference moved away from that, so It's all been high sheen glossy for…"

"Go for the door frame in the back. It gives you a place to stand or sit, out of the way and less pressuring on the customers, plus it give you easy access to back stock and a place to wrap up purchases. Most shows do give space in the back, even…"

"If the center of the trailer has 6'6" clearance, then go for it. I had the standard 7' panels and bought 5   of the 6' panels from another artist, and converted all 5 with the adjustable leg kits from Propanels. It's a piece of cake, just follow…"

"The carpetted section is 6' tall. The top stubs add a few more inches, and you'll still  have length below the carpet to add another couple of inches. It's not going to work. The issue with towing a trailer is not the length but what the towing…"

"I was told by a local artist when I did the Crosby Gardens show in 2021 that it was a dog and too new."

"For right now, the old-fashioned way of using graph paper will do the trick. Use 8.5x11 graph paper turned horizontal, and use 1/4" grids with one inch=1 foot. Assume that your display area is 6'x10' with three panels available. That way each…"

"Sort of late to respond to this, but better late than never. I don't have nearly the years of doing Summerfair, but the days of photography doing well there seem to have passed, or at least for me. I did it several times many years ago and did okay…"

"A solution is to hack standard tubs. For 18x24 matted flip bin prints I took two 18-gallon Roughneck totes to create a taller container. You take the lids and remove the inner flat surface of the lids, leaving the ring that snaps onto the tub. Run a…"

"Scan them. You'll get better results than rephotographing them. They will, of necessity, be submitted as a 1920x1920 pixel image. If you have 8x10 images, it will be no problem to scan them, Scan them as 16 bit B&W images unless you have toned…"

"That sucks. At least there was a little shade.
"

"$1378 is overly pricey for a pop-up. A similar tent frame is available from Eurmax is about 1/4 the price with a decent canopy top. If you want a vinyl top, Flourish has replacement tops of vinyl for a reasonable price. Replacement top from Flourish…"

"The 7 footers are relatively easy to put up. The 9 footers not so easy. The fix is what they call the Easy Riser, a length of pipe matching the Sta-Bars slipped into a couple of right angle fitting attached in the middle of the front and back (or…"

" What size are your framed prints? If they're a medium size, 18x24 or 16x20, a suitable carrying box can be made out of Rubbermaid Rough Neck totes. Use an 18 gallon Tote for the bottom and a 12 gallon tote upside down for the lid. Cut the center…"

"For 16x20 and under, I use Denny Manufacturing out of Mobile, Alabama. Their Denny Novelty section handles the printing. Denny is a long established maker of photographic studio props. They are oriented toward resellers and not general public trade.…"
More…
Loading ...

of 3 Next
This reply was deleted.