I'm a painter, with pieces from $75 to $4500. This show was the first "real" show that accepted me, eight years ago, and it has also been my highest-grossing show ever, two years ago. But after this year, I'm going to take a break from it.

The show takes place at the Three County Fairground in Northampton, MA. It's a wealthy area, and the show advertises heavily on all media, and draws people from all across New England. It has a great postcard mailing program, and a beautiful show catalog. Gate fee is $14, but you can get big discounts from going to their website and giving them your email address.

In the past, the show has taken place in three distinctly different buildings on the site - a small, old barn; a medium-sized new barn; and a gigantic arena building. This year, for the first time, it took place in three identical buildings, the new barn plus two new new barns.

I was in the last row in the last barn, the farthest from the gate. Traffic was very light - and I think it was because of my spot. I heard many people say, basically, "Whew, we're almost done, thank heavens."

The new arrangement made set-up and breakdown easier, I will say that, though I think that if you were in the middle building, that might not have been the case. Artist parking is plentiful, and on site. There's a special area for RVs, who can spend the weekend, at a price. I believe there are hook-ups.

The new buildings are lovely. There was plenty of storage for me, and for others along the walls of the buildings. I don't know about the areas in the middle aisles. There are general storage areas in each building, and a special locked storage area for jewelers.

This is a lovely show, with stunning, jaw-dropping high-end work. There's a great mix of 2D art, furniture, sculpture, fabric, ceramics, glass, jewelry and anything else you can think of. Booth sitting is offered every day (you sign up), and there's terrific food.

I did OK at the show, about $3K, but that's about half my usual total for this show. Others around me did very well, and friends in the other buildings had even more successful shows. I might have saturated this market somewhat, as many buyers came up to say hello, but not to buy. A year or two off from this show will be helpful, I think.

If you have high-end stuff and find delight and excitement and inspiration in being in a truly fabulous show, this might be one to try. 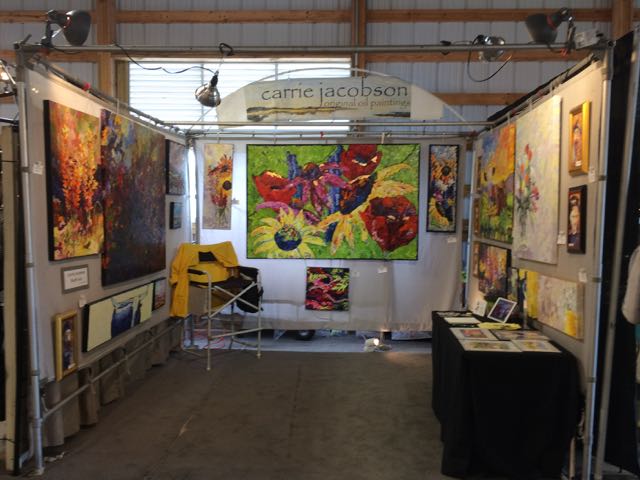 This is a one day show in september in conjunction with fall fest. the lady who runs it is so unbelievably nice that its hard to write anything bad about the show, but Garden city is a shitbox.  the town is all grain elevators and feed lots and depending on the wind direction smells like rotting cow flesh.  I was there for about 30 hours and that was far too long.  There are a few people from what I've heard who have lots of cattle or oil money but i saw no evidence of it.  I mostly sold cheap prints.  I'd say if its geographically super convenient to do, maybe do it. the jury fee is only $10 and $60 for the booth fee which i actually didnt even pay til i was at the show. and they had prize money! not a ton but compared to the booth fee it was okay.  I got 2nd prize which was $200 so that was nice.
Just a little info for anyone considering this show.
Although the jewelers near me seemed to be really busy, but i dont know how well they did.

Read more…
Though not exactly in Park City (that is 6 miles further down the road) some of the people that showed up were staying there as-well-as in other nearby accommodations. Park City is known for having a very large art show hosted by the Kimball Art Center, on main street, usually the second weekend in August. And, as a matter of fact, the 42nd Annual Show is happening this coming weekend. I had never done a H.A. event and had read some conflicting reports from people with differing experiences at some of his other shows. With that in mind I wanted to maintain an open attitude about the show. I had some trepidation about the idea of participating in a show that was only in its second year in a venue that was somewhat off the beaten track. Wanting to try something different, and at the suggestion of an  artist friend,  I forged ahead. Redstone is actually a shopping/residential center that was used to service the 2002 Olympics in Utah with mixed retail, restaurants and residences just off I-80. Set-up for the show was done in two stages, one group getting in on Friday night (people with REALLY large sculptures) and the others on Saturday morning. Though I don't know for a fact why that was but think part of that was because of the residential and restaurant areas not being impacted. Though not terrible, load-in was somewhat congested in the narrow streets and we had to wait a while to get our chariot out as the road was blocked by other larger vehicles.  Sunday the weather was mostly overcast which was a nice respite from being cooked the day before and by about 4 p.m. the crowds thinned as the weather threatened. At 4:30 on Sunday, Terry (I think) a representative from the H.A. group rushed through and told everyone to pack up as some severe weather was on its way and we didn't have to wait for an orderly exit! The sky did open up on us but everyone took it in stride and made an orderly exit. Access to the center is usually simple, but is anything ALWAYS simple? During the weekend, just outside the shopping district, on the main access corridor to the center the road was being torn up to insert an underpass for pedestrians and bicycles! North and South bound traffic was diverted into one lane each way, needles to say, traffic during the day was backed up for at least 1/2 mile. I overheard one intrepid art patron talking about the difficulty of getting in but she persevered in order to attend the show. That says a lot for the willingness of people to come to a show! With all that said, how was the show? I like the fact that it was a smaller show, the artwork was high quality and the turnout was enough for me to have paid expenses and made some money as well! Would I do it again? This show combined with the Kimball show would make for a nice combination over a weeks time. I bagged the Kimball show this year as last year I came away in the red (after it being my best show ever 6 years ago) so the H.A. show renewed my faith in this areas ability to support an arts show.
Read more…

First let me say that I was impressed with what Kansas City has done with the Power & Light District, the downtown area where the show was held. It appears that the city has invested a considerable amount of resources to make “The District” a vibrant place. I have never been to KC prior to this trip so I have no idea what the area was like before, but now it seems like a happening, downtown area. Good job, KC.

Friday setup was in the rain the entire time, a drenching, steady rain. Fortunately by the time I was done with setup and got back to the RV to change into something dry the rain had stopped, the sun was making occasional appearances, and the streets were drying out. Reason enough to be optimistic since my show the previous weekend was a total bust. See other’s reviews of Art Birmingham.

The Downtown Art Annual is on fairly narrow city streets so setup/teardown can be a bit tight, but everyone worked pretty well together. The show is a three day affair with setup starting at 11:00 am Friday and the show running from 5-9 pm that night. By 9:00 pm it is pretty dark and lights are needed for your work to have any hope of being seen. There is power available but there is a catch. The city light poles have electrical outlets which we were allowed to plug in to, if we had a way to reach them, they are about 25 feet above the sidewalk. Needless to say nobody took advantage of the “available” power.

Sales, at least for me, were less than expected, I covered expenses plus a little. I am a black & white photographer and had a lot of interest in my work but couldn’t get enough people to pull the trigger. However, the mixed media artist next door did quite well. Saturday was the busiest day with a good sized crowd that seemed genuinely interested in looking at the art and talking with the artists, as opposed to just strolling through the zoo, looking at the animals in their cages, and eating a corn dog. For the most part I found the customers to be considerate, appreciative, and fairly sophisticated. Never once was I asked to give a discount, all of my sales were at full price. How often does that happen? Friday evenings crowd seemed to be the younger, hipper, KC downtown residents and if your art appealed to their tastes, good sales could be had. Sunday was the slowest day with light crowds and equally light sales.

As has been my experience at most shows that feature music, it was way too loud! During most of Saturday communicating with customers was difficult. I enjoyed the music, it was a nice blend of blues and jazz with a touch of rock n roll, but I wasn’t there for the music. Sunday’s music was a welcome relief. While still being a blend of jazz & blues, the volume was several decibels lower. Horace Washington & Friends, the first of two musical groups on Sunday were quite fun and entertaining from noonuntil 2:00 pm and continually urged the crowd to “buy art”. I spoke with him afterwards and expressed my thanks for his encouraging the folks to buy art and he said, “Unlike you folks (the artists) we get paid no matter what. You are the reason everyone is here, we are here to support you”. How refreshing!

There was no food court. This was a Howard Allen show, a first for me, and from my understanding HA shows do not have food courts. FYI.

As a side note, I have experienced just about every kind of weather in my years of doing shows except a tornado. I am from the Northwest and the T-word strikes paralyzing fear in me. I can deal with earthquakes, wildfires, rain, wind, snow, ice, but please, no tornadoes. Turns out that the tornado that destroyed Joplin, MO happened on the Sunday of this show and was only 150 miles away. Way too close for my comfort. My thoughts and condolences go out to the folks who were affected by this devastating storm. Makes my less than expected sales pretty insignificant.