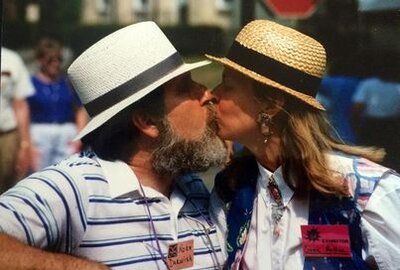 After decades of service to the art fair industry, Connie Mettler, our Founder and Publisher, has retired. Learn more below about her years of pioneering work on behalf of artists and art fairs nationwide and online. Please click through at the bottom to comment and share your best wishes on Connie's retirement, too!

Connie Mettler’s passion from the beginning was to help her artist friends make money.
Her mission:
“ArtFairCalendar.com exists to promote the work of the artists and craftspeople who earn their living exhibiting at art shows around the U.S.”

In the beginning...
Connie participated in her first art fair in June 1978 in Royal Oak, Michigan, followed by the Ann Arbor Art Fair that July. Connie’s husband, Norm Darwish, exhibited photographs of rotten tomatoes taken in Detroit’s Eastern Market. Shoppers weren’t sure what to make of them and Norm eventually evolved his style to offer the often Victorian, hand-colored photographs that he was known for (often with Connie as the model).
After several years of exhibiting part-time, they decided to pursue art fairs full-time together. Connie retired from her position with Detroit Public Schools in 1984 due to the success and fun they were having. They juried into 32 shows in 2000, their peak year. The last event where they displayed Norm’s photos was Arts, Beats, & Eats in 2006. In honor of their retirement, they were granted the privilege to be the first to tear down.

The first chapter...
In brainstorming about what to do next, her son, Scott, recognized an opportunity: while most art fairs had their own websites, there was no national directory that helped art collectors and shoppers find shows to attend. He built the online ArtFairCalendar.com (AFC) website in 2004, initially focusing on Michigan and Florida only.
Connie had no intention of starting a business, but she had good mailing lists of existing customers for those two states. The new service quickly found a national audience and expanded into other states and regions, even internationally. The most popular art fair website in the US, ArtFairCalendar.com has been ranked #1 by Google for online searches for “art fairs” for more than 15 years. The monthly “What are You Doing this Weekend?” email that is published in regional editions was part of AFC from the beginning. It currently goes out to over 85,000 subscribing art patrons nationally. 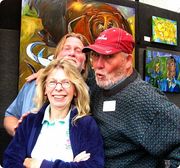 The ArtFairCalendar.com platform and its spinoffs collected a first of its kind combined audience of working artists and artisans, plus top show directors and staff, plus art patrons from across the country. A winning pattern emerged: Scott would suggest an idea based on what he was seeing in the new media world, and Connie (being Connie), would run with it. Can you imagine learning HTML in your 60s? Plus, multiple software platforms, soliciting advertisers, keeping clients happy, social media marketing, and managing/training new staff to use software you barely had learned yourself? All while free-lance staffing and consulting with Art Fairs across the country? That’s Connie.
Chapter Two...
Meanwhile, social media chat rooms and online communities were emerging as important new ways to connect. Connie was busy with ArtFairCalendar.com and not enthused about another techie learning curve to build out ArtFairInsiders.com (AFI). But when helping Scott as an editor on his second Internet entrepreneurship book, she saw that he had used the new community forum for artists as a case study! The book demonstrated how anybody, even his mother, could build an online business. She learned the new community platform and recruited her many friends across the industry to use it. There were thousands of members in the first year and today there are more than 17,000. Remember this was before Facebook became widely popular – Facebook did not even become available beyond

educational institutions until 2006.
Several more avenues...
Having built a unique new platform online, Connie was on a roll helping her friends in the industry, and supporting herself and a small team after Norm retired. 2010 brought the launch of another website at ArtShowReviews.com. The first free art fair reviews site online, it was designed to help artists share information and find the best shows for their work.
Shows across the country were asking Connie for help finding artist exhibitors, and artists were using AFC to find shows. By 2010 her son built CallsForArtists.com (CFA) to help Connie help her artist friends and fellow show directors, too. In 2019 it posted over 160 events helping artists find fine art events to travel to and exhibit. Like the rest of the industry, 2020 was hit hard by the 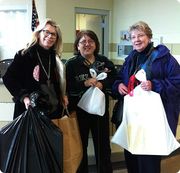 pandemic, but 180 events have been posted for 2022 thus far and the site is open for business to serve more.
ArtFairRadio.com began streaming in 2010 as likely the first podcast for working art fair artists. Connie’s hosting pioneered the call-in podcast and interview formats for the art fair industry. It played a valuable role sharing business information and building community in the art fair ecosystem.
In 2013 Connie launched the “Best Art Fairs” survey and competition on ArtFairCalendar.com. This publicity initiative continues to help top shows promote themselves, engage patrons, and attract publicity to ArtFairCalendar.com.

The goodwill all this work generated in the community was huge – it allowed Connie to hold an annual “Birthday Pledge Drive” on ArtFairInsiders.com. Artists, shows, and sponsors contributed prizes as rewards for PBS-style pledges the audience sent in to support Connie’s websites. She followed this up with a Secret Santa exchange on ArtFairInsiders.com to further help build community among the artists.
The big pivot...
When the reality of the pandemic became obvious in March of 2020, Connie had to do something to help artists stay afloat. AFC had 70 shows listed in April of 2020; only one was live. Art Fair producers and directors were quickly pivoting to virtual shows. The first AFC “What are You Doing this Weekend…?” email edition featuring virtual shows went out on April 2, 2020. A Virtual Shows page on AFC was added, too. Connie conducted a series of how-to podcasts on Art Fair Radio, with experts on

Web design, using social media, and what government resources were available to help artists get through the crisis.
The Covid pandemic also prompted her to jump on the Zoom bandwagon in May 2020. Partnering with Sharon McCallister of ArtFest Fort Myers, she began hosting private virtual “Show Directors Community Calls” for show producers and directors. These are held monthly online with dozens of participants from across the country. The calls continue to give top art event directors a place to share experiences and learn about resources.
A lasting legacy... 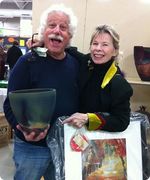 Connie was on the board of Arts, Beats & Eats in Royal Oak, MI, and Art Fair Director there for 14 years, a Board member of the Guild of Artists and Artisans in Michigan, and a founding member of the NAIA. Connie has now retired after 44 years in the Art Fair industry. You will still see her fingerprints on the websites, but she has finally begun leaving home without her laptop. An avid world traveler, we still receive regular updates and assignments whether she is in Viet Nam, Germany, Argentina, or California. She went snowshoeing and cross-country skiing last winter, but managed a meet-and-greet with the Art Association of Jackson Hole.
As Connie would say:
“With freedom, books, flowers and the moon, who could not be happy?”
Oscar Wilde
Thank you, Connie! 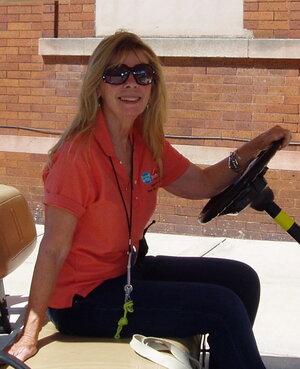 Do you have a Connie Mettler or ArtFairCalendar.com story to share? 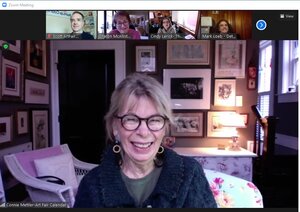