This is a timely extra blog I am writing.

I still have two more show reviews to write.

I just dealt with Ian in Florida and have some helpful tips for you all.

First off, I am a native Floridian.  I have witnessed at least six hurricanes.

Just had not been in one for a long time and then came Ian.

My earliest hurricane memories started in 1955 when Donna hit the Suncoast, St. Petersburg.

My father worked for Florida Power, he was an engineer.

I remember him driving us out to Pass-a-grille beach to see the damage.

Back then most beach cottages were simple wood structures sitting atop a couple of cinder blocks above the ground.

As we passed the fabled pink hotel, the Don Ce Sar, we saw cottage after cottage sitting 50 yards out in the Gulf, water up to and thru the windows.

The hurricane backwash caused all this.

Only the Don was still standing on the beach.

Nowadays, I live in Michigan for five months and New Smryna Beach the rest of the year.

I usually do not get back to Florida til after hurricane season is past.  Thus no hurricane preparedness supplies.

This year was different.

I did not get back into Kansas City Plaza, so I planned on being home by the end of September.

I had the Winter Park Autumn Art Festival to doin early October.

So we decamped from Saugatuck on Sunday,September 27 figuring to be in NSB by Tuesday the 29th.

I was pulling my usual midsize UHaul trailer behind my Ford E350 van, with Emma the cat and Ellen as passengers.

That night in Nashville, while staying at a hotel, somebody went under my van and sawed off the catalytic converter.

Made for a very noisy ride home plus terrible gas mileage.

At the time I was aware of Ian but figured it would be more of a problem for the Gulf Coast.

Boy was I wrong.

We arrived in NSB around four in the afternoon on Tuesday.

Every gas station was sold out of gas.  I had a half tank.

I found the last two bags of ice at my local Quickie store.

We had two Coleman coolers full of food. We had plenty of liquor.

Dumb me, I did not have a propane gas grill to cook on.

That night we had electricity until about 5am.

THen Ian traveled slowly across the state towards us.

By the time it hit us it had tropical storm force winds.

We had a fierce pounding rain that laid down three to four feet of water in eight hours.

It rained nonstop all day Wednesday, with water slowly rising.

I had 28 inches of rain covering my carport.  Water was well over my knees.

Well, we are surrounded by tidal creeks and bays and ponds.

We went to bed that night, dry inside, but not sure what Friday would bring.

The next morn, my neighbor Chet called me.

"You better take a look outside."

I did.  It was not a pretty sight.  Water was now inside Ellen's car parked by the street. It was right up to my rear cargo doors on the van.

We have three stairs up from the carport to our sunroom. It was over the second step.

I had boxes of matboard and frames stored on the porch. I moved everything inside piled high onto every table I had.

I did not have any sandbags. The water slowly leaked under both the porch doors which were 28 inches above the ground.

We ended up with three inches of water covering the rug. The main entrance to our house was only five inches higher.

Luckily it never went any higher.

When we awoke Saturday morn, the water had dropped down to lower levels, still covering the carport.  It was a sloshy walk anywhere out there.

We had neighbors paddling around in canoes and kayaks because that was the only way to get around.

Electric came back on later Saturday and we slowly dried out our rug.

No vehicles ruined, although my neighbors across and by me lost theirs.

Our AC unit dried ou and I restarted it four days later.

So here are my tips.

If you are going to tough it out these are important tips.

First, have a gas grille with a backup tank.

If you can get a generator, do it.  Store up extra gas.

Have sandbags stored up.  Otherwise, bagged mulch will still do the job. Mine did not float away.

Store up candles and lighters.  Have some battery powered lights.

If it looks like you are going to flood inside have tables at least four feet off the floor.  Use cinder blocks to gain height.

Register for FEMA pronto. They will come.

When storing the debris from your yard plus ruined items from the house.  Make two separate piles. One set of trucks picks up yard debris. Then other set comes and picks up ruined items.

Get a canoe, they can be very helpful.

Otherwise, do your damnedest to get in the Plaza and avoid all this shit.

Hope this was helpful.
Two more blogs to go and then it is aloha.

I am not retiring from shows. I am just going to be semi-retired, only two shows per month with December and August off. 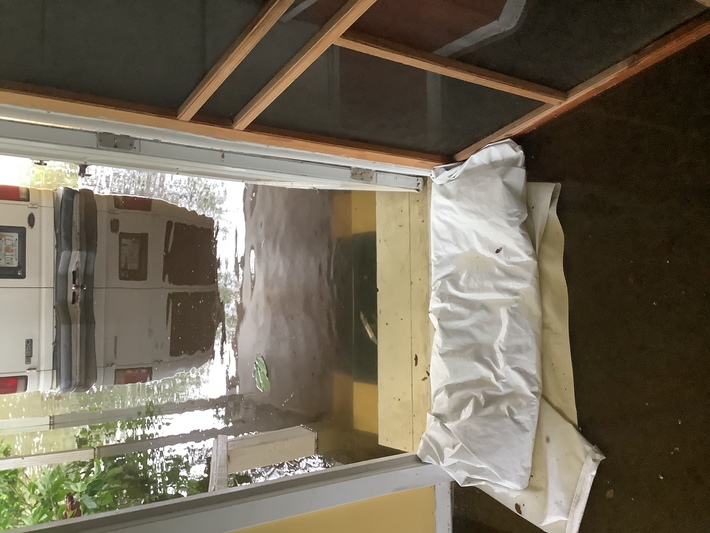