I did the Best of the NW spring show in Seattle last weekend. It's held in an old air base hangar on Lake Washington, which is a funky and very "Seattle" location. It's put on by the Northwest Arts Alliance, an artists' organization that's been promoting this show for quite a few years. They also put on a large holiday show in November. They are great folks, and they work hard to get the word out. There were plenty of TV and radio spots leading up to the show. Set up was on Friday afternoon/Saturday morning, and load in and out is quite easy, just a short dolly into the building.

The turnout was good - steady to crowded most of both days. I had a steady stream of shoppers both days, with only a few lulls. Seattle art-festival-goers are a wonderful bunch - very curious, relaxed and friendly.  The promoters book great music - everything from jazz to zydeco - which puts everyone in a festive mood. There were just three food vendors, all very good. Overall, this should be the formula for a good show. 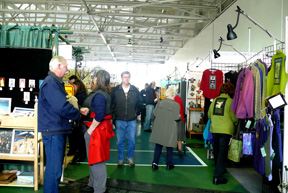 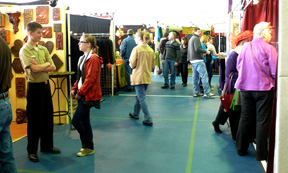 However, there was definitely budget-consciousness in the air - I don't think I've ever had so many people pick up a piece and ask questions about it, then walk away without it. I did sell a couple bigger pieces, which helped make it a profitable show for me. A couple booth neighbors did really well, which was encouraging and a pleasure to watch. Some others in my aisle didn't do so great. I imagine my sales were in the middle somewhere. I'm hoping as the year (and my sales technique) warms up, the buyers will relax a bit and sales will be better.

It did feel great to kick off the first show of the year in the Northwest. Overall, the show is worth a try if you are local and need an early Northwest Show to get the juices flowing.