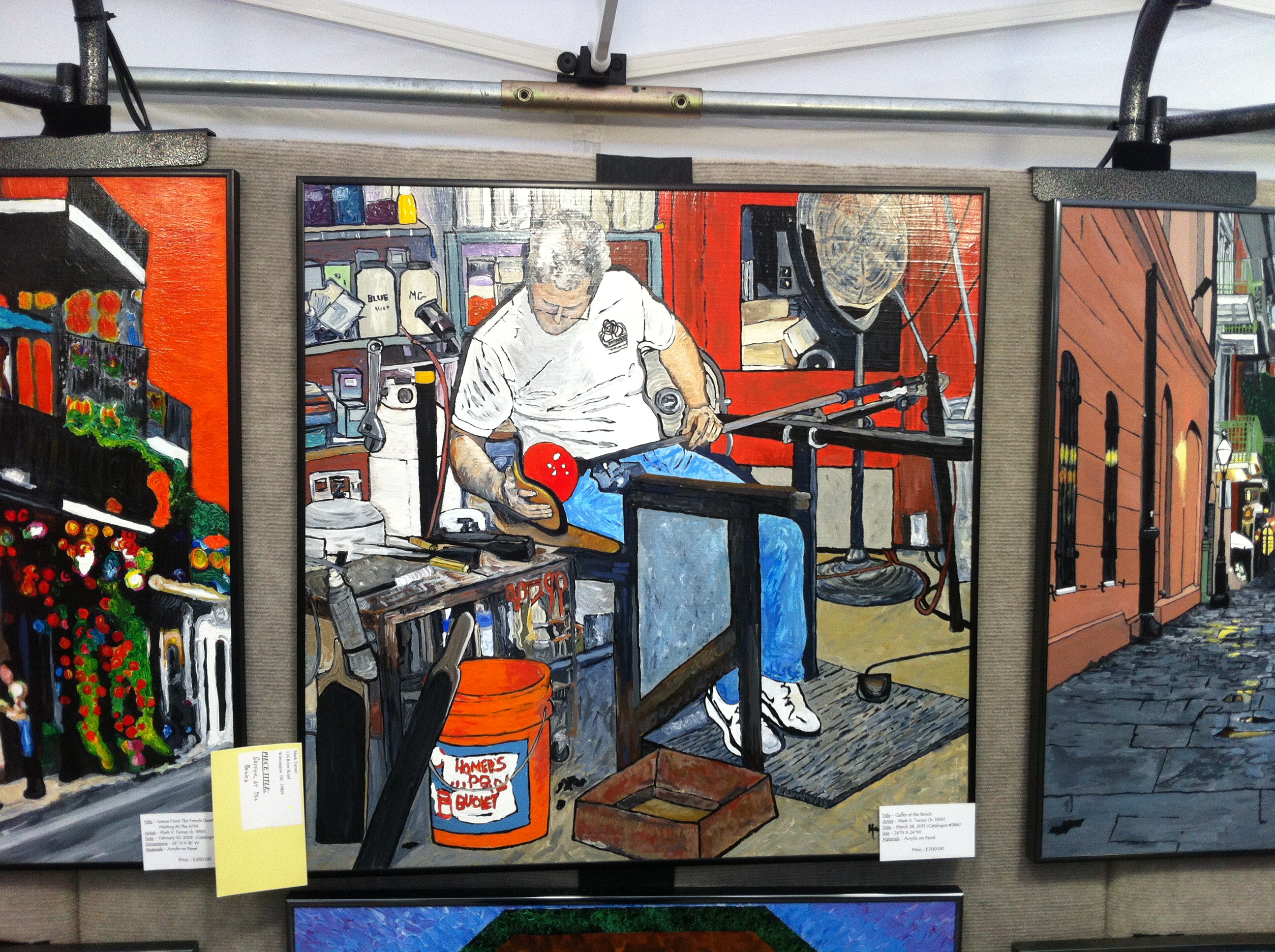 So earlier this summer, I was looking to fill a hole or two in my schedule. In checking on eventlister.com/craftlister.com and a couple other sites, I saw an opportunity for an event slightly northwest of Philadelphia.

It was an event billed as a medium sized one day arts and craft event put on by the Borough of Lansdale, called the Lansdale Festival of the Arts. It was very inexpensive for a booth (Under 100$).

The event is held in a small park which also has sports fields. Parking was available onsite for exhibitors. Staff were very well organized and cheerful...

The exhibit is billed as rain or shine, with a rain location indoors at a nearby school.. But it would appear that it has to raining pretty good night before/day of in order for event staff to move the event inside. Setup started at 7 AM. I was looking at the radar before we left as the weather had been pretty iffy the night before - and .... yes, just as we left, rain was starting to move into the event area. However, it seemed limited in size/duration and looked like it would pass through by the time the show started.

We drove into the rain and got to the event site from Wilmington in about an hour.. It was still raining when we got there and the event staff were signing people in as we arrived. You could drive onto the site and you were assigned a spot partially by the order of arrival and partially as they balanced the show exhibitor positioning by discipline on the fly.. ie no assigned booth positions as far as I could tell. The check in person was under a pop-up canopy and remarked that when she left to get to the event, the rain was not on her radar, but sure was now. There was no move however to re-locate to the indoor school location..

We were directed to our spot and my wife and I proceeded to get rolling on the set-up. The event staff were very flexible in allowing us to keep vehicles at our spots while doing the wet set-up; rather than doing the traditional dump/park and then set up.. There was a pottery exhibitor who had assumed that since it was raining, that the event was going to move indoors. She stood in the rain with no canopy while her husband ran for her pop-up tent. Tents ranged from the very expensive to the splayed leg type with non-white canopies..

Since the show was to be judged and prizes awarded, we had two entry cards in out welcome packet that we were to fill out for pieces we wished judged for the event. Got everything set-up in time and parked.. The rain let up just as the event was starting.. Surprisingly, there were early-birds who ignored the rain. I noted Steve Oliver, the event director for the Rittenhouse Square Art Festival was exhibiting. He didn't remember who I was... which is probably good given the disagreement we have had over giving artists jury scores....

For being a wet day, the event was pretty well attended by a fairly eclectic and international crowd. It spit rain off and on during the course of the entire event. but while the sun peeked out a couple times, it remained mostly overcast and dreary. I was very glad I had my lighting set-up with me as this helped a lot...

What I didn't have during the day were sales.... There was buying energy for the typical wearables categories... But I only saw a moderate amount of fine art being hauled away and a lot of prints. The judges came saw and recorded; then left without much in the way of conversation. I sold one small piece during the day for net sales under 100$. It covered show costs and mileage.

An hour or two before show close staff came wandering through to hand out ribbons. They passed us by and we thought that was that.... But then they came back asking if we knew where booth 38 was... Why yes, you are standing in it.... Well, that was when they asked about my painting "Gaffer at the Bench" - a painting depicting master glass artist Mark Rosenbaum of Rosetree Glass in Algiers Point, Louisiana.. I pointed it out to them with the entry card.. They then said congrats and handed me my second blue ribbon in two weeks.  It comes with a check, which I have not seen yet, but they said would be in the mail. The prize money was gracefully donated by National Penn Bank.

As the show closed, it began to rain again....this time more steadily and we had to do a wet teardown.. Thankfully, we were able to get vehicles onto the wet site and nobody got stuck. Teardown was uneventful

All in all, I think I would do the event again.