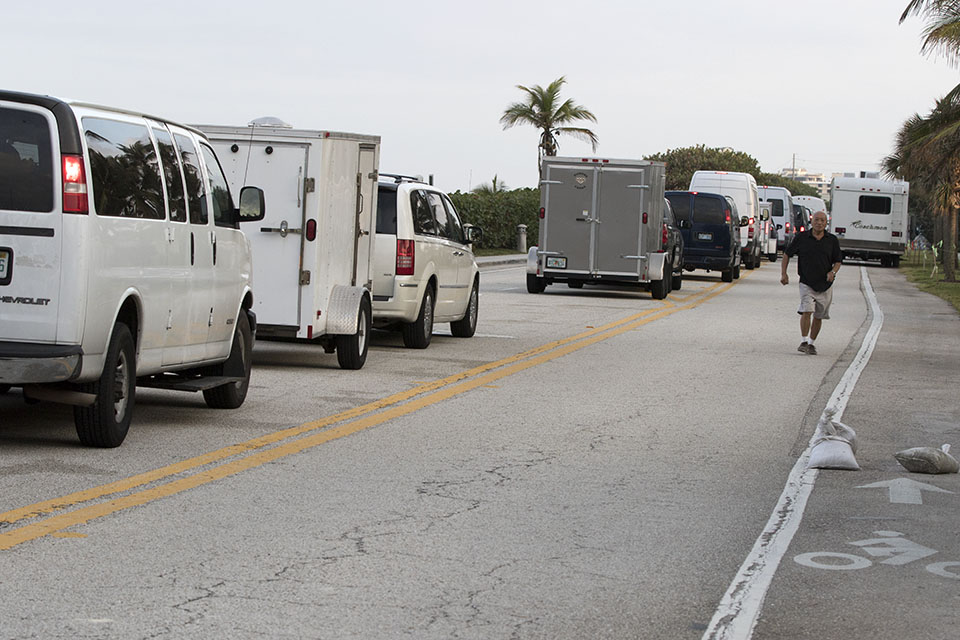 This is one of Howard Alan's largest shows, stretching along A1A from Marcinski Rd. (on the north) to the south entrance of Loggerhead Rd. (on the south) in Juno Beach, FL--close to Jupiter on Florida's east coast. I don't cite the distance in "blocks" because there aren't any: These are the only two access points for the show. Setup began at a leisurely 10 AM on Friday and stretched as long as you needed (You could come at 6 AM Saturday if you wanted, but most took the Friday setup option.)

Artist parking is provided at each end, but so many artists had trailers (each requiring its own space) that the lots filled up by 9 AM when I arrived on Saturday. There was a Publix shopping center with lots of parking just west of the north entrance, so I parked there instead with no repercussions (despite the 24/7 towing surveillance signs).

The stretch of A1A has tall hedges on both sides. This was a warm, mid-80s weekend with high humidity and a predominantly south-to-north breeze, and the hedges funnelled the breezes along the road--making it nice for walking show-goers, but not necessarily for artists sitting in their booths. It was hot in there!

This is another show I'd categorize as surprisingly "meh" for me, though many others seemed to do well...a category I'm using for more and more events this season. Whether due to the heat, or the time zone change on Sunday (which always seems to make patrons a little sluggish, as though their wallets are on a time lock), this show never really got rolling for me. I had five sales on Saturday, all decently sized. But Sunday was a different story, with only one(!), as folks strolled by groggily and buying energy seemed to dissipate.

Your results may have varied:  My fine art bird work seems to fly better in SW Florida than on the east coast--particularly south of Stuart/Hobe Sound. Not sure why that is, but the hot spots for me in Miami/Lauderdale/Palm Beach are few and far between. Although I was profitable on the weekend, it wasn't the big payday I'd hoped for after not having been at this show since 2013.

On the other hand, maybe it's not a case of avian aversion: Most folks around me weren't that excited about their sales. But I talked with other artists down the long, long row who eventually made out OK--some because of that one big buyer that we artists increasingly seem to target. Several jewelers I spoke with wound up happy; large paintings started moving past my booth in late afternoon on Sunday, but I didn't see that much functional art or photography moving out.

Gotta give big kudos to the HAE on-site team. The show logistics were well-communicated; coordination with the local police was solid, and staff handed out coupons for local-restaurant discounts along with their pleas for patience. Timetables were distributed, and to artists' credit, were followed: Many artists were invited to park their vans behind their booths, space permitting, with the promise of an earlier exit. Everyone had to break down to the ground, get a pass from staff, get their vehicle, and surrender the pass upon entry to A1A. If you wanted to dolly out--well, it was a long one!--but many show vets chose to do just that. Big vans came in last. And despite the dearth of access points and the breakdown plan's complexity, everything went smoothly, if a bit longer into the night than we normally see.

Finally, a personal note of thanks to Chick (I don't know his last name), who lent me a spare corner/rooftop connector part for my Trimline so I could get set up after I discovered at setup that mine had come loose from the pole atop my Ford Transit somewhere along the trip to Juno. It wasn't a perfect fit, but nothing that duct tape and a couple of snug bungee cords couldn't make good as new.  I'm really appreciative. Artists are the best!

(Picture: The scene at the north gate just before sunset on Sunday night. Artists lined up patiently while a single lane was expertly kept clear by HAE staff.)