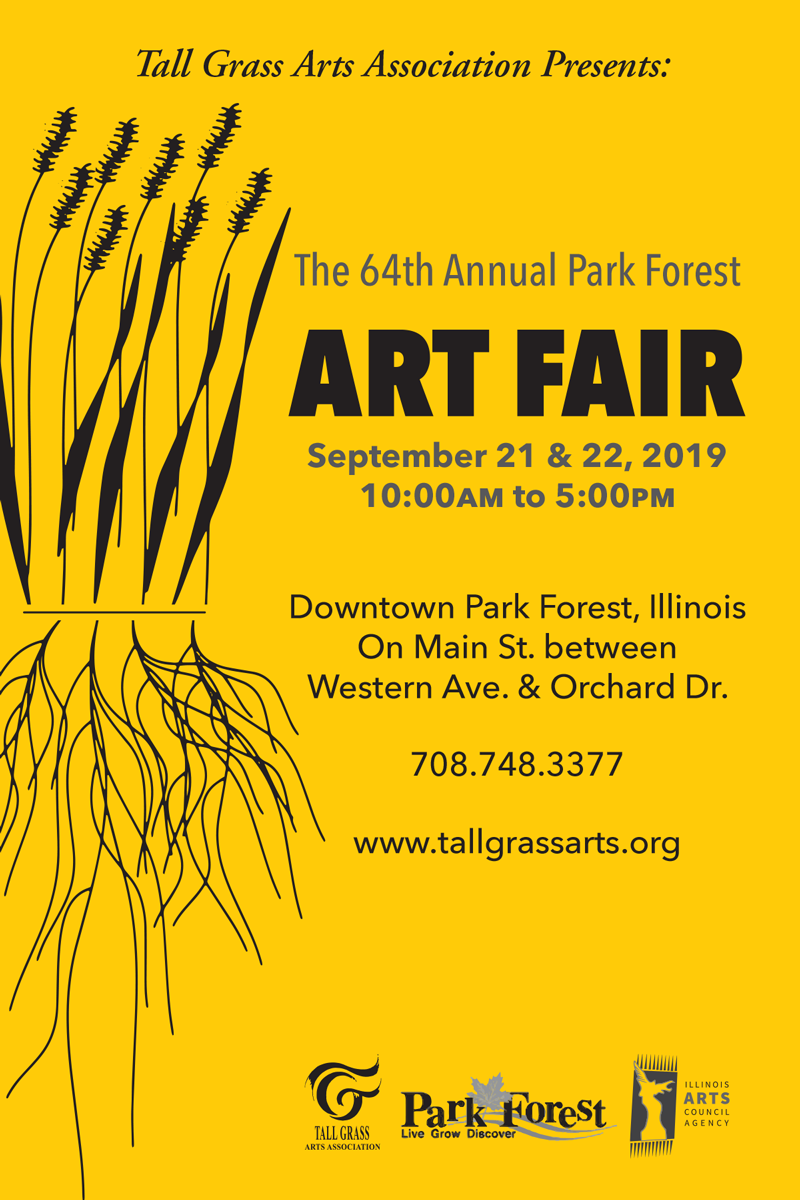 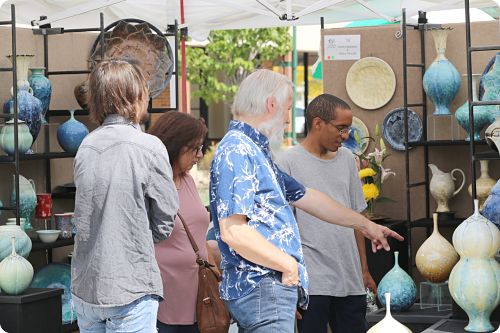 All year the Tall Grass Gallery sells gift certificates that can only be redeemed at the 2019 Park Forest Art Fair. Artists, last year, noted that it was difficult to get away for lunch if they were maintaining their booths by themselves so the Board voted to provide artists a snack lunch.
Marketing:
The fair is promoted in many newspapers. Although newspapers are reluctant to publish stories about a fair that is located outside of their service area, if the story prominently mentioned a participating artist, newspapers were willing to publish such stories. Paid ads were also placed in several publications. It is promoted with a week of ads on WBEZ during drive time. Posters are distributed around the region and postcards distributed in print and on email. The largest new effort, last year, which will continue and be enlarged this year, was use of social media. For several months prior to the fair, Facebook carried a daily story abut one of the participating artists. Twitter and Instagram also promoted the fair. These efforts will be expanded this year.
Testimonials:
I received the acceptance letter yesterday and just wanted to say thank you! I heard about the Park Forest Art Fair through a closed art fair artists' group. The gentleman had such wonderful things to say about the show itself, the community, and about the people at the arts association who run the whole thing. Those kind of reviews speak volumes, in large part because they are uncensored- the general public doesn't have access, so there is no benefit OR detriment to the artists who choose to write up a review of an event. So, the Tall Grass Arts Association must be doing something right to inspire an artist to recommend it so highly! I am grateful and honored to have been accepted as a juried artist and am really looking forward to seeing everyone in September. Lauren Martin.
At the "Made in Chicago" market, two ladies who are TGAA volunteers were shopping my booth. After looking at my handwoven items, they suggested that I consider vending at the Park Forest Art Fair. I was flattered and said I would look into it. As I had been a customer at the PF Art Fair several times a few years ago, I knew that the quality of artists was good and that the TGAA was very active in the community. It was an honor to be a vendor this year! The Committee treats the artists wonderfully. Ellen Grenier Bevill.
Many of the artists who exhibit at the Park Forest Art Fair return again and again over the years. To express his appreciation, an exhibiting stone sculptor, originally from Zimbabwe but now working in Arizona, offered to conduct a one-week stone carving workshop prior to the art fair.

APPLY:   http://tallgrassarts.org
More Information can be found on the Tall Grass website,  tallgrassarts.org. Artists may apply through submission of the application that can be downloaded from the site or through  Entrythingy. Artists are also welcome to call the fair coordinator, Janet Muchnik at 708-439-2424, jmuchnik@sbcglobal.net