(image courtesy of Sidney Carter)
September 1-4 - Labor Day Weekend
Downtown Royal Oak, Michigan
Fri. - Sun. 11am-11pm; Mon. 11am-5pm
135 Artists
Deadline: March 31
On Labor Day weekend, we play host to over 400,000 visitors who come to enjoy the amazing diversity of art, music and food in a cool urban setting and we'd love to have you join us in 2017. 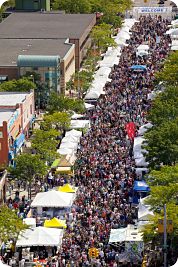 Arts, Beats & Eats is carrying on an 20 year tradition of celebrating the end of summer in Metro Detroit. Our promotion, guaranteed by generous media sponsor support, is considered among the best of art festivals nationwide.
You cannot be in the metropolitan Detroit area on Labor Day weekend without seeing specials about the arts activities on television, hearing artists' interviews on the television and radio stations and seeing comprehensive articles in the press, directed solely to the juried fine arts show.
Location:
Downtown streets of Royal Oak, Michigan. Nowhere else in metro Detroit will you find a greater concentration of award-winning boutiques, restaurants, salons, galleries and theaters.
Attendance:
Approximately 400,000 people projected over the 4-day weekend, based on last year's attendance, promotional media, event programming, reasonable good weather, and our wonderful location.
Advertising:
More than 1.5 million dollars in promotional advertising on radio, television, and print medium. In addition, the event will be promoted on posters, flyers and in the newsletters of participating charities.
Artist Amenities:

The festival is committed to culture and diversity in its presentation and is focused on operating with an environmentally friendly focus. Proceeds from Arts Beats & Eats are divided among local non-profits.  In its first 18 years, the Festival has donated over $4.5 million to local charities.