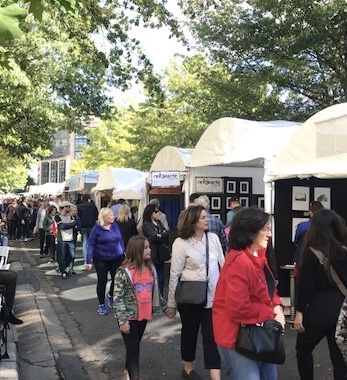 It’s been awhile since I have shared a review.  I got tired of reviewing the same shows every year so decided to keep the reviews to new shows.  Bethesda Row Arts Festival was October 13-14.  Bethesda is a city just outside of DC.  This is a very wealthy part of DC.  The show takes place on the streets of a high-end shopping area.  Communication from the show is excellent.

The show runs on Saturday 11-6 and Sunday 10-5 with free admission.  Set up is early morning Saturday with scheduled arrival times. Ours was for 4 am and you could arrive as early as 3:30am.  We woke up at 3am, before the alarm went off so decided to go early and everything was calm and easy to do. Drop off your stuff then go park.  That early in the morning there are a ton of parking spaces on the street and artist parking was close by.   I am glad we arrived early because it started to lightly rain.  We already had our tent up so no big deal for us. Since it started raining The show allowed artists to set up their tents quickly then unload into their tents.  The set up on our street was back to back other streets had booths across from each other.  The back to back tents had next to no space behind or side to side, so no storage outside of the booth.  We planned for this and I have to say it’s sort of liberating not having all this extra stuff you don’t NEED at the booth.

The show doesn’t open until 11 am on Saturday.  That was very nice to have a few hours after set up to go back to the hotel and relax/nap before the show. The weather was on the cool side for us and was a nice change. The rain stopped before the show started on Saturday.   We arrived at our booth at 9:45 am to finalize a few things and made our first big sale at 9:50 am, over an hour before the show even opened.  That’s the way to start a show.  The crowds were strong in my opinion all day Saturday but other artists said it was usually more crowded.  We were busied all day talking to serious buyers so I was thrilled with the patrons. I had no idea how my booth neighbors did on Saturday because we were just too busy in our own booth.  Sunday morning it rained, not heavy but enough to keep the crowds away.  It gave me a chance to talk with my neighbors and almost everyone around me were very happy with Saturday.  The rain stopped I think around noon, I can't remember exactly and the crowds came and again bought.  As usual Michael handles the deliveries on Sunday mornings, no traffic, and was gone most of the day only coming back to take pieces to deliver from Sunday sales.  All of my neighbors were happy with sales as were the other artists I talked to.  Love when you can report a good to great show for most.  The entire staff and team were amazing.  They were very friendly, always in touch, reaching out to the artists.  I can’t imagine wanting anything more from a show director and the staff.  Even the police were some of the nicest and helpful we have worked with at an art festival. This show is in a logistically difficult location but they pull it off wonderfully.

Breakdown went a little differently this year but since it was the first time we did the show we didn’t know any different.  You break down get a pass then line up.  They let just a few vehicles in at a time which slowed the process down according to artists but it went very smoothly with no chaos and for a tight breakdown I thought it was pretty fast. We hope to be back in the future.