My thanks to Michael Solomon who forwarded me this thoughtful article from the Christian Science Monitor:

"It used to be that we made a lot of stuff: televisions, clothes, washing machines, radios, typewriters, shoes, telephones, and furniture. And we also used to make the stuff out of which stuff was made: steel, aluminum, plastic, rubber, glass, and electrical components. Today that's largely made overseas. They send us their stuff… Continue

A couple of years I attended an ArtServe conference in Lansing, MI, where I heard Tom Tressor, the "Creativity Champion", exhort us to Art the Vote. Tom's mission is standing up for creativity, and encouraging creative people to seek public office.

We've just been through this tremendous political activity. I know many of you were inspired by it and aren't quite ready to go back to things as they were. Are you… Continue

The Avon, CT, Farmington Valley Arts Center needed a new idea to draw patrons to the art center for a fundraiser. "The idea for the Bad Art Show came when the two dozen artists and the board of directors that make up the arts center wanted a new approach to attracting visitors to their studios. Every year, the arts center hosts a series of events during the holiday season, and members were determined to do something extra creative this year," reports the Hartford… Continue

Your Challenge Today, If You Should Choose to Accept it... Yes, it is Sunday morning on a long holiday weekend. There were very few art fairs this weekend. Those of you who are online should be ready for this challenge from an old friend of mine who is looking for your most outrageous art fair/craft show story and who wants me to:

2. stimulate the prurient to expose to the…

This is a special edition of our Call for Entries. Listed below are twelve Chicago area professionally run art fairs by Amdur Productions.

Headed by Amy Amdur, these events exploded on the art fair scene 26 years ago when the Port Clinton Art Fair appeared in the affluent community of Highland Park, IL.

Taking her cue from this success she has gone on to create new events in affluent areas of the metro area. Her hard work coupled with… Continue

Pittsburgh Cultural Trust to the Rescue of 3 Rivers Festival

The very popular Three Rivers Festival in Pittsburgh that runs through three weekends in June has been struggling to keep its bills paid in recent years. The festival supports many entertainment venues plus three different art fairs, a different group of artists each weekend and is held in the glittering Golden Triangle in the downtown.

Because of economic uncertainties the future of the event was in question. Now the Pittsburgh Cultural Trust has stepped in to take charge. "The 2009… Continue

Having troubles getting your digital images together? Need advice about jurying into art fairs? Have no fear the Laguna Beach Festival of Arts is holding a 2 and a half hour seminar on Tuesday, December 2, 2008 from 7:00 p.m. to 9:30 p.m. at the Forum Theater on the Festival of Arts grounds at 650 Laguna Canyon Road in Laguna Beach.

Read the rest of the details at:… Continue

"He defied stereotypes and 'didn't want to just sell you a piece of art. He wanted you to know all about it," said his office manager, Janet Seitzer.

Read his story at the Chicago… Continue

Welcome to Cali Hobgood-Lemme from Chicagoland who joined ArtFairInsiders.com today and became member #100 of this new social marketing network for artists. A welcome also to Ann Light, Jay McDougall, LizAnne Jensen and Michele LeVett who are #'s 101, 102, 103 7 104!!

My many thanks, really, to all 104 of you who are helping to build this site into a strategic resource for art fair artists as we enter into the Brave New World of really scary… Continue

Amdur Productions invites you to participate in the next Chicago Area

Everything you need to know about getting into shows but were afraid to ask...
and
Maximizing Your Sales at Art Shows in the Current Economy ...

* What you need to know by Amy Amdur
* The… Continue

How Cool is This? $12,000 Grant to East Lansing Art Festival

Who would have thought there was any money left in Michigan? As the hearings roll on on Capitol Hill about loans to the auto industry, good news seeps out for art fairs.

As reported in the Lansing (MI) State Journal, "The State of Michigan Council for Arts and Cultural Affairs awarded the art festival a $12,000 grant.

Funding recipients were determined by in- and out-of-state culture and arts professionals who reviewed more than 300 applicants, the city said. East… Continue

Who Was That Artist Featured in the Wall Street Journal?

What a thrill, local girl makes good! Chris Roberts-Antieau of Manchester, MI, was recently profiled in the Wall Street Journal under this headline:

A True Rags-to-Riches Story, Chris Roberts-Antieau Is One of the Foremost Self-Taught Artists in America Today

3 Rivers Art Festival - What Next?

"As funding for such events across the country has become less available and costs, such as insurance, have risen markedly, it has become harder and harder to offer a free festival, let alone to be all things to all people."

There is much food for thought about the continued funding of art fairs and arts festivals around the country. If this is a concern for you you will fine an interesting discussion in this Pittsburgh Post-Gazette article,… Continue

Were you planning on getting your booth and product photographed by Jerry Anthony at this season's holiday shows? Thank again. Jerry and his partner Sharon Richwine will not be there. Here is their announcement:

The winter shows are coming very quickly, & we wanted you to know that for the first time in 26 years, we will not be there.

Jerry & I have decided to stop going on location to shows and help save our bodies for work here in the studio.

There is a rumor that artists will be part of the inauguration in January.

I promise to stay hot on this issue and bring you information as soon as I get it.

Here is the scoop:

ObamaArtReport is reporting an art celebration like the Manifest Hope gallery at the Denver convention:

Apparently, Shepard Fairey and his team are currently in the works to put on a new Manifest Hope-like… Continue

No More Sugarloaf in Michigan!

After more than ten years of managing a big art fair in Novi, MI, twice a year, Deann and George Verdier, owners of the Sugarloaf Craft Festivals announced that they have cancelled their contract with the Rock Financial Showplace for their April and November events to concentrate on their East Coast events. The well-managed and promoted event will be missed by the metro Detroiters who loved shopping indoors at these shows.

But, not to worry, folks. Scuttlebutt has it that local event… Continue


You are cordially invited to Omaha to be a part of one of the most vibrant art festivals in the Midwest. Located downtown alongside a beautiful park, the award-winning Summer Arts Festival draws a diverse crowd of 80,000 people for a weekend of great music, tasty food, children's activities and, most importantly, wonderful visual… Continue

A Little Bragging: A Fan for ArtFairCalendar.com

Don't tell my mother, but I'm tooting my own horn here. Recently, I found a fan online, Barbara Sistak Baur. She called my website an "Art-Throb". First time for everything!! Here is what she had to say: 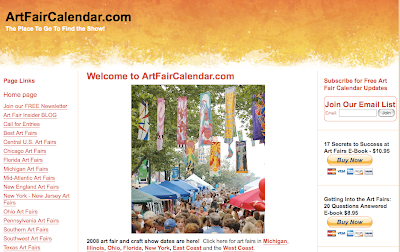 Art-Throb is a term I use for a great place to discover art. And ArtFairCalendar.com is such a place. This web site gives you all the info on the top Art Festivals and Craft Shows in Illinois, Michigan, Wisconsin,… Continue

Here's another idea for when you run out of things to do in the art fair business: build your online presence. About a year ago I discovered mixed media artist, Dolan Geiman. Not only is his art cutting-edge, contemporary and fun, he and his partner, Ali Walsh, are using all the tools of the online world to promote him and build a community around his art and ideas.
I regularly receive beautifully designed newsletters full of their latest… Continue

Pennsylvania Convention Center Preview Party, November 12th November 13th through 16th This premier show and sale of contemporary craft, includes 195 of the finest and most dynamic craft artists in the United States, selected from 1,402 applicants. Artists from Israel will be featured. All work is for sale. furniture by Steven Uren The Philadelphia Museum of Art Craft Show was founded in 1977, and was the first retail craft show… Continue