The Riverfront Art Festival celebrates its fifth anniversary this year. It features a picturesque setting, winding along the… Continue This is the second year for the OOAK show in NYC. Last year it was held at Pier 94. It seems that the low attendance and the location have caused the Merchandise Mart organization to move the show to what is a more central location. The organization owns the building… Continue

A program to help Haitian children deal with their experiences and feelings since the earthquake in Haiti will begin this spring through a partnership between Haitian Ministries for the Diocese of Norwich and CHART, an organization of art therapists from around the world.

Art therapy sessions for children in programs in Port-au-Prince connected with Haitian Ministries will begin this spring and run regularly for at least a year.

CHART’s mission is to help in the psychological… Continue (The full disclosure: I am a consultant for this event, so may be said to have a prejudiced point of view. I've been with it since its inception. Also
please forgive the quality of the photos.) The history: about 15 years ago Sugarloaf Mountain Craft Shows came to Novi, MI, in the heart of affluent Oakland County to host an art show. As you may remember these were the good times when everything in Michigan was golden.… Continue beautiful evenings on the Plaza…
Continue

Tired of waiting/acceptances/rejections from art fairs? Ready to take even more of your fate into your 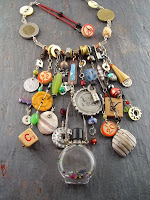 own hands? It is always exciting to see groups of artists get together to make it happen for themselves. More and more artists are having open studio tours, starting indie events, taking part in pop-up galleries. Here's a new one in my neighborhood, in a rural area north of Fort Wayne, Indiana. The Custer's Last Stand is now accepting arts and crafts exhibitor and food vendor applications for its 38th Annual 2010 Festival of the Arts.…
Continue


Exciting News! The 25th annual CraftFair at Hathaway Brown is moving and improving!

The CraftFair at Hathaway Brown is now the Shaker Heights Arts and Music Festival! Ohio Designer Craftsmen, a non-profit organization dedicated to…
Continue

In Michigan George Walker publishes the definitive book with hundreds of events be they fine art, fine craft, art and craft show of all types, so he really has his ear to the ground. A member of AFI forwarded this to me:

Spammers out to get us!

Hi Nels and everyone else who has asked:

Here is what was happening. I had the settings on this site so anyone could add a blog post and no one would review it. It would be immediately viewable to everyone. That was just fine, we're all adults here and it was fun to discover what everyone had to say.

However, earlier this week spammers started hitting the site and did blog postings about drugs, aceteminophen, darvocet, etc., every day at least five or six blog postings --… Continue

Here is a recent blog post from Seth Godin, the bestselling author, entrepreneur and agent of change, that should be of interest to the ArtFairInsiders.com audience:

The reason you have a front lawn? It's a tradition. Lawns were invented as a way for the landed gentry to demonstrate that they could afford to waste land. By taking the land away from the grazing sheep, they were sending a message to their neighbors. We're rich, we can happily waste the… Continue

and generous members at Art Fair Insiders this month. These three, plus all the rest of you who contribute to this web site, are bringing

transparency to our business. Your willingness to share the "good, the
bad, and the ugly" at the art fairs on the streets of America is making
Art Fair Insiders THE place to be online.

Those folks at the Art in the Square in Belleville, IL, really take the integrity of their show seriously. Even the mayor has asked local merchants not to sell the work of "rejected" artists from their spaces during the event, and certainly the merchants can't have sidewalk sales. Ann Arbor please take notice!

"Mayor Mark Eckert on Tuesday gathered about 30 downtown merchants at the city's new firehouse to politely ask them not to engage in that practice. He discussed that among other… Continue

- Get approved for a Merchant Account and get Mobile Merchant Pro for the iPhone™ or iPod® TouchFree! they'll also set you up for Authorize.Net™ at no additional charge.

The Great Lakes Art Fair is eager to encourage young people to consider careers in the visual arts. Therefore, we are providing a free student section or greatly reduced booths for College Level student artists. The Great lakes Art Fair is April 23-25, 2010 at the Rock Financial Showplace in Novi.


We have a Student Section that will be a shared space equivalent to 4 booths that is free of charge and will be shared by 10 students. This will be given to students that… Continue

Bringing art to the community and the community to art. That's the mission of the Guild of Artists & Artisans. The Guild, which has been a force in the art fair world for more than 40 years, is best known for its award-winning Ann Arbor Summer Art Fair. Guild events have a… Continue